Mark's choice of musical gear is often a topic of conversation among fellow guitarists, musicians and fans alike. Here is a breakdown of a few of Mark's guitars, amplifiers and effects pedals that he uses in the studio for recording and onstage in live concert settings:

Mark plays Gibson and Fender electric guitars  and although he has owned a few others over the years such as Charvel and Jackson, he feels the quality, tone and reliability of his Gibson and Fenders are unsurpassable. Here are a few of his favorites for studio and stage work:

Black & Cream 2001 Gibson Les Paul Classic﻿  Mark acquired this guitar several years ago from a fellow musician and fell in love with it instantly. Slim taper neck, light weight, dual humbucking pick ups, mother of pearl inlays, cream binding & trim, the guitar is a keeper! And easy on the eyes too! One of Mark's favorite stage guitars, he had it fitted with strap locks and Sperzel locking tuners.

"Cherry" 1971 Gibson Cherry Sunburst Les Paul Deluxe  Mark acquired this 1971 Gibson Les Paul Deluxe from a vintage guitar shop in Cleveland in the early 1990's. It features a cherry sunburst finish and original Kluson tuners. Mark had strap locks put on the guitar for stage work but only played the guitar in a concert a small number of times. The original Gibson "mini humbuckers" are notoriously known for being rather noisy, so Mark had Seymour Duncan drop-in replacements installed. Mark loves the incredible, warm vintage tone of this guitar but does not take it on the road with him anymore. He doesn't feel it is the right type of guitar for live rock-n-roll concert settings, so he mainly uses it now in his studio when recording and writing songs. It still has the original purple plush Gibson case and some of the original Gibson paper work.

"Georgia" 1969 Fender Thinline Telecaster  Mark picked up this old 1969 Fender Telecaster from a vintage guitar dealer at the Dallas, Texas Guitar Expo back in the late 1980's. It's an original "Thinline" model with ash wood body, semi-hollowbody F-hole, and maple neck. It has an old B-bender mechanism on it for drop D tunings. Mark had Sperzel locking tuners put on, as he does on all of his stage guitars, and had some of the inner electronics updated. He had the original, softer stock single coil pickups replaced with Fender Lace sensors which give it a little more grit and bite. The guitar was allegedly owned by a Macon, Georgia country player in the 1970's who supposedly backed up George Jones, Conway Twitty and Merle Haggard. This is one of Mark's favorite stage guitars. Because of the origins, he nicknamed her "Georgia". There are a few Dixie flag decals on the guitar, including one with the Georgia state flag on it.

"Blackie"  Black Mid 1990's Gibson Les Paul Special  Mark's favorite stage guitar, this mid 1990's Gibson Les Paul Special features a lightweight body, slim taper neck, small frets, black finish and stock 490 and 498 Gibson pick ups. The stock Gibson tuners were replaced with Spurzel locking tuners and Mark had strap locks installed as he does on all of his stage guitars. This is Mark's main guitar for recording and live performances and he feels the stock 490 and 498 pickups cut through crystal clear at loud volumes on big stages and give the guitar that distinctive Les Paul tone.

Mid 1990's Gibson Les Paul Junior    This guitar belonged to Mark's old friend Ronnie James Dio (Ex Black Sabbath & Rainbow singer). He bought it out of the estate after Ronnie's passing. Dio was a capable guitarist, bassist and drummer, as well as being recognized as one of the greatest male rock singers of all time. He actually wrote a lot of the music, melodies and chord progressions for Black Sabbath and his solo band Dio and used this guitar in his home studio while writing songs and recording. Ronnie wrote several songs on the "The Devil You Know"  album on this guitar. Mark doesn't take this one on the road and plays it on special occasions. The guitar features a tobacco sunburst finish, wide neck, single P-90 pickup, and volume & tone control knobs.

Yamaha RBX374 Bass Guitar  Mark bought this Yamaha four string bass guitar with active pickups in the mid-2000's for writing songs and recording. With a small 15 watt Galien Kruger B-150 bass amp it does just fine!

﻿1993 Martin DM Road Series﻿  Mark bought this guitar back in the early to mid 1990's. It is his favorite acoustic guitar for live performances and recording and was used on the "Voodoo Highway" song. He feels that the signature Martin "low E" rumble is simply incomparable. He loves it for its warm rich tone, easy playability and impeccable Martin quality.

Late 1950's Gibson L 5 Acoustic-Electric Guitar  This guitar is actually a family heirloom that belonged to Mark's uncle Bill. He acquired the guitar after his uncle passed away several years ago. Uncle Bill was always supportive of Mark's interests in music and playing the guitar and would occasionally let him touch "the old Gibson". A cousin of Mark's refinished the guitar back in the 1980's and unfortunately removed the original Gibson "speghetti style" logo from the head stock and the original tailpiece. The guitar is a semi-hollow body with two F-holes, an early style single pick up and volume and tone knobs. Mark is in the process of having the guitar's original bridge and Gibson logo restored. This one stays at home!

Mark's choice of amplifier for any given situation depends on many different factors: live or studio work, size of venue, indoor or outdoor show, size of stage, etc. He has owned a wide muriad of amplifiers over the years, these are a few of his favorites for recording and live concert performances:

1978 Marshall 100 Watt JMP Head modded by Mark Cameron  This is Mark's favorite amplifier. A 1978 Marshall JMP 100 watt head that was modded by Mark Cameron back in the early 2000's with the "Ocean-Sykes" high gain/low end boost circuit. Cameron did this mod on many top player's Marshall's such as Slash, John Sykes, DJ Ashba, Doug Aldrich and some others. Played through any variety of 4x12 cabinets fitted with Celestion speakers, this amp simply screams. He runs it through a 1960 Marshall 4x12 slant cabinet (occasionally as a full stack with an additional cabinet). Full of buttery smooth tone and plenty of power and gain for big stages, it's Mark's number one live amp. The Cameron modded Marshalls are simply some of the best Marshalls out there.

1986 Marshall JCM 800 100 Watt Head Ex-Vivian Campbell  This mid 1980's modded Marshall JCM 800 was owned by Ronnie James Dio and was used by guitarist Vivian Campbell on the 1986 tour and later by guitarist Craig Goldy on the 86-87 and 1988 Dream Evil tour after he replaced Campbell. It is one of many amps that were part of Dio's live stage show equipment. The head was ran through four 4x12 cabinets fitted with Celestion speakers and ran in stereo during the Dio live concerts. The head was modified with an added effects loop and extra gain circuit. Mark uses this head as a back up to the JMP onstage, and runs it through a Marshall 4x12 cabinet fitted with Celestion speakers.

2005 Soldano Avenger 100 Watt Head  Mark was first introduced to Soldano amplifiers after met Mike Soldano at the N.A.M.M. show in Los Angeles in the late 1990's. Allman Brothers guitarist Warren Haynes turned Mark onto the Avenger 100 watt head in the mid 2000's and Mark has continously used this head as a back up, paired with a Marshall 4x12 cabinet fiited with Celestion speakers. Considered a "boutique" amp by some, Mark loves the rich, thick gain andt tone and has also used this head for certain recording applications.

1968 Fender Twin Reverb  This amplifier is an original 1968 100 watt silverface. Mark has owned this amp since the late 1970's. He has had the amp re-tubed several times, and some capacitors replaced. It has the original Jensen speakers. Clean or griity with an Ibanez TS1 tube screamer pedal, this amp sings. Mark has used this amp onstage and in the studio.

1998 Fender Twin Reverb  This amp is a modern blackface re-issue. Mark acquired this amp brand new in 1998. It serves as a more reliable back up to the '68 twin both onstage and in the studio. Full of 100 watt Fender tube power, Mark had this one fitted with two 75 watt Celestion speakers.

1977 Fender Champ  Mark's parents bought him this amp brand new in 1977. It is the first amplifier Mark owned and he still has it all these years later. It's a small watt tube amp featuring a 5Y3, 6L6 and 12ax7 in the pre-amp circuit. With that un-mistakeable Fender tube punch and tone, Mark has used it to record with on several occasions.

Mark has always felt that if you can't simply plug in and play, then "something's wrong with your playing". But he does uses special effects pedals from time to time if they enhance the melodic content of a song or serve another pupose in adding to the musical panorama. Here is a break down of some of Mark's effects pedals and accessories:

Gibson Power Stealth Attenuator  Mark was first turned onto the Gibson Power Stealth in the late 1990's by former Humble Pie and Breathless guitarist Alan Greene. Mark will occasionally use this power soak for smaller hall/room applications in conjuction with his JMP set up, although he clearly acknowledges it reeks havoc on the tubes and power transformer.

SKB Powered Pedalboard  Mark got this powered SKB pedal board in the late 1990's and used it onstage for years. He would occasionally swap out pedals, sometimes removing one or two, perhaps adding something else in later. The two constants were the Boss TU-2 tuner, which Mark considers "an absolutely must for any guitarist on a concert stage" and the old Ibanez TS-9 Tube Screamer pedal which he used for rhythm crunch. The Turbo TS-9 was used for solo boosts. The Boss Chorus was used for adding sparkle to pretty, melodic parts of songs; and the Boss Digital Delay was used to add depth to occasional solos and intros. A Boss harmonizer was used to duplicate double and triple harmony solos off the record.

Boss Tuners  Mark uses the Boss TU-2 in concert, wired through his pedalboard onstage during live performances to ensure true, proper A 440 tuning; and the Boss TU-12 hand held model at home and in the studio. He feels Boss tuners give the most accurate and reliable readings of any tuners on the market.

Nady Wireless Systems  Mark has used Nady Wireless microhone and guitar systems for over 30 years and believes they are simply the best in quality, clear true tone, and reliability. Mark claims he has never had a Nady go down in a live concert performance. 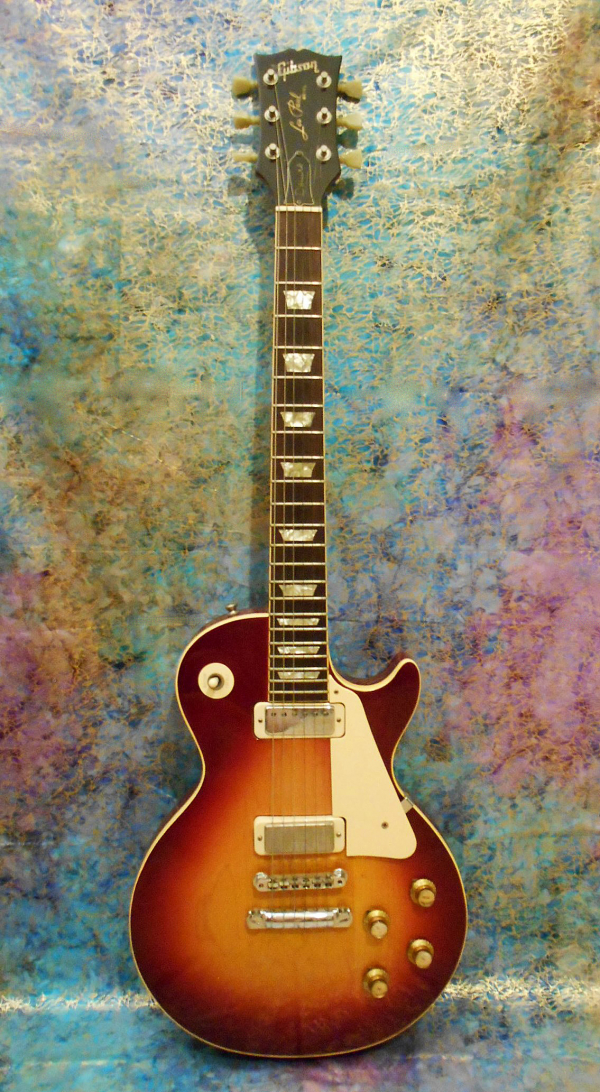